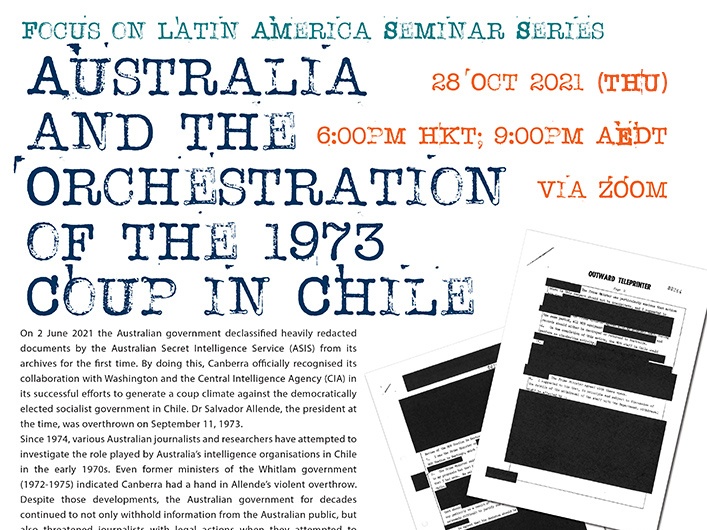 Australia and the Orchestration of the 1973 Coup in Chile

The University of Hong Kong proudly invites you to join our:

“Australia and the Orchestration of the 1973 Coup in Chile”

On Zoom, All Welcome, No Registration Needed (Zoom link)

On 2 June 2021 the Australian government declassified heavily redacted documents by the Australian Secret Intelligence Service (ASIS) from its archives for the first time. By doing this, Canberra officially recognised its collaboration with Washington and the Central Intelligence Agency (CIA) in its successful efforts to generate a coup climate against the democratically elected socialist government in Chile. Dr Salvador Allende, the president at the time, was overthrown on September 11, 1973.

Since 1974, various Australian journalists and researchers have attempted to investigate the role played by Australia’s intelligence organisations in Chile in the early 1970s. Even former ministers of the Whitlam government (1972-1975) indicated Canberra had a hand in Allende’s violent overthrow. Despite those developments, the Australian government for decades continued to not only withhold information from the Australian public, but also threatened journalists with legal actions when they attempted to investigate the activities of its intelligence agencies in Chile. In this talk Dr Rodrigo Acuña will discuss the newly declassified ASIS files as well as the dark history behind the attempts to uncover Australia’s role in installing the military dictatorship of Augusto Pinochet (1973-1990).

Dr Rodrigo Acuña is an independent journalist who writes on Latin American politics, an Alborada contributing editor and the host of Alborada’s Indestructible Podcast. He holds a PhD from Macquarie University were he also worked as a lecturer for several years. Rodrigo has been interviewed in The Australian, Australian Broadcasting Corporation (ABC), SBS Radio (Spanish), Al Jazeera (London), Sputnik (Montevideo), Radio Adelaide, 2ser, TeleSUR English, Venezolana de Televisión amongst others. You can follow him on Twitter here.