The Egyptian Revolution of 1952 saw the establishment of an anti-imperialist government led by Gamal Abdel-Nasser. As a result of subsequent political developments, Ernesto ‘Che’ Guevara made a celebrated visit to Palestine in 1959.

Guevara’s visit to Gaza in 1959 was the first sign of transforming the Zionist colonisation of Palestine from a regional conflict to a global struggle against colonialism. The trigger was the meeting of Asian and African states, known as the Bandung conference, in 1955 and the resulting Non-Aligned Movement, whose members had just recently shaken the yoke of foreign domination. The stature of Nasser, as a world leader in the struggle against imperialism and colonialism, brought world leaders to see for themselves the devastating results of the ethnic cleansing of Palestine, clearly demonstrated in Gazan refugee camps.

The Gaza Strip became the symbol of Palestine. This tiny sliver of land (1.3 per cent of Palestine) remained the only place raising the flag of Palestine. It carried a major part of the Al Nakba burden when it became the temporary shelter for the inhabitants of 247 villages, expelled from their homes in southern Palestine. Villages in the south were ethnically cleansed by the Israeli military operation Yoav, also termed ‘The Ten Plagues’, in October 1948. Not a single Palestinian village remained. This act of total ethnic cleansing was propelled by several massacres which took place in Al Dawayima, Bayt Daras, Isdud, and Burayr, among others.

Refugees, now corralled into Gaza Strip, were not immune from Israeli attacks even after their expulsion. The Majdal hospital was bombed in November 1948, as was the nearby Al Joura village, which stood on the site of ancient Ashkelon and from which many future Hamas leaders would emerge. In January 1949, Israelis bombed food distribution centres in Dayr Al Balah and Khan Younis at peak hours, leaving over 200 bodies decimated by air raids. These raids led the usually restrained Red Cross to describe it as a ‘scene of horror’.

The occupation of Palestinian land and the expulsion of its population gave rise to a resistance movement, known then as the fedayeen. These resistance fighters crossed the Armistice line to attack the occupiers of their land.

In order to stop the incursions of the fedayeen and eliminate the idea of resistance, Israel continuously attacked the Gaza Strip refugee camps. In August 1953, Unit 101, led by Ariel Sharon, attacked the Bureij refugee camp and killed 43 people in their beds. In August 1955, Israel, again led by Ariel Sharon, blew up the Khan Younis police station killing 74 policemen. In the same year, the Israelis killed 37 Egyptian soldiers in Gaza railway station and a further 28 who were on their way to defend the others. The last attack changed the course of history in the region. 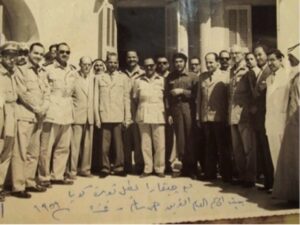 Egyptian president Gamal Abdel-Nasser, whose revolutionary government assumed power in Egypt in July 1952, signed the first armament deal with the Soviet Bloc for arms denied to him by the British. He also authorised the fedayeen resistance by officially organising them under Colonel Mustafa Hafez.

On 29 October 1956 Israel invaded Sinai in collusion with Britain and France. The attacking Israeli soldiers entered Khan Younis on 3 November 1956, and collected all males between the ages of 15 and 50 from their homes and shot them in cold blood on their doorstep or against a wall in the town’s main square. A list of the names of the 520 people killed exists. The following week, another massacre of refugees took place in Rafah. There were a deafening silence in the west about these massacres until the gifted cartoonist Joe Sacco immortalised them in his book Footnotes in Gaza.

These tragic events came to the world’s attention when Nasser became one of the recognised leaders of the Non-Aligned Movement starting with the 1955 Bandung conference. The Gaza Strip and Palestine came globally to light as the latest case of colonialism and ethnic cleansing.

As a result of this political development, Che Guevara, the Latin American revolutionary, came to visit the Gaza Strip in 1959 at Nasser’s invitation. 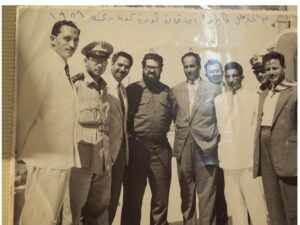 Guevara’s visit was momentous. It was the first time that a famous revolutionary had come to see the devastation created by Al Nakba first hand. He was met enthusiastically by resistance leaders, such as Abdullah Abu Sitta, leader of the fedayeen and leader of the southern front in the Arab Revolt of 1936 (see Fig 1, to the far right in Arab dress)  and Qassem el Farra (Fig 1, third from right), Secretary of Khan Younis Municipality who kept records of fedayeen and their activities. Both were members of the Palestine Legislative Council.

According to evidence I received from contemporaries about the visit, Guevara told Palestinian refugees they must continue the struggle to liberate their land. There was no way but resistance to occupation, he said. He admitted that their case was ‘complex’ because the new Jewish settlers occupied their homes. ‘The right must eventually be restored’, Guevara affirmed. He offered to supply arms and training but Cuban president Fidel Castro wanted this aid to be coordinated through Nasser.

Mustafa Abu Middain, leader of the Al Bureij camp, took Guevara to visit the camp and showed him cases of poverty and hardship. ‘We have worse cases of poverty’, Guevara shot back. ‘You should show me what you have done to liberate your country. Where are the training camps? Where are the factories to manufacture arms? Where are people’s mobilisation centres?’

Guevara was accompanied by General Caprera, an expert in guerrilla warfare. Caprera (Fig 2, with the beard) met with community leaders to advise on methods of resistance. Guevara became the icon of Palestinian resistance and struggle for freedom.

Nasser took great interest in Guevara’s visit. He met Guevara in his office, took him to public and official functions, introduced him to community leaders and presented him with medals. That was the start of very close relationship of revolutionary Latin America with Nasser and the Palestinians which remains to this day.

After Guevara’s visit, Cuba gave scholarships to Palestinian students, granted citizenships for stranded Palestinians and held many conferences in support of Palestine.

During the Israeli war on Gaza in the summer of 2014 (Operation Protective Edge), Cuba sent tons of humanitarian aid to Gaza and received the injured. Support spread to most Latin American countries. El Salvador, Chile, Ecuador, Peru and Brazil all withdrew their ambassadors from Israel in protest. Bolivia’s President Evo Morales labelled Israel a ‘terrorist state’ and restricted the entry of Israelis into the country. President Nicolás Maduro of Venezuela ‘vigorously condemned the actions of the illegal state of Israel against the heroic Palestinian people’. The Nicaragua campaign for solidarity  with Palestine was very vocal both in official and civil society fields. The presidents of Uruguay, Brazil, Argentina and Venezuela issued a joint statement calling for a cessation of violence and an end to the Israeli blockade of the Gaza Strip.

In the 1950s, Guevara was not the only well known personality of the Non-Aligned Movement to endorse the rights of Palestinians in a free Palestine. Jawaharlal Nehru, Prime Minister of India, also came to visit Gaza in the same pe riod. This was the start of close Indian and other Asian support for Palestine.

About the Author: Salman Abu Sitta