Live updates throughout the day as Brazil goes to the polls to elect its new president, with far-right candidate Jair Bolsonaro the heavy favourite against his centre-left rival Fernando Haddad.

(10.17pm) Bolsonaro is now being confirmed as the next president of Brazil across international media.

(10.07pm) Reports suggest that Bolsonaro is on the verge of being confirmed as president after he received 56 per cent in the exit poll, compared to Haddad’s 44 per cent

There is not confirmation yet.

(9.50pm) Rio based editor of the The Intercept Glenn Greenwald tweets about the exit poll due shortly

“Roughly half of the presidential votes are counted in Brazil but they don’t release them until 6 pm EST when all polls close (45 mins from now). But early signs are good for Bolsonaro as gubernatorial candidates aligned with him are doing very well in Rio de Janeiro & São Paulo.”

Read it here. Listen to his election preview, recorded this morning, here.

Back when he dedicated his vote to impeach Dilma Rousseff to the military general who tortured her during the dictatorship, Bolsonaro was a fringe extremist in the Brazilian congress whose vile rhetoric still seemed marginalised. Was the attention he gained from that high-profile attack the beginning of his political campaign? Little did we, and most probably he, know that a little over two years later, he would be on the brink of leading Latin America’s most powerful nation.

In this piece from Alborada issue three, Gabriela De Oliveira assesses the right-wing campaign to remove Dilma Rousseff that can now be understood as the beginning of Brazil’s descent into the abyss.

Students at public universities across the country have displayed strong opposition to Bolsonaro’s hateful agenda. Authorities shut down protests at more than 20 universities across the country on the grounds that they were political rallies taking place in state-funded institutions, something which is prohibited under Brazilian law. Students and other young people are at the forefront of the anti-Bolsonaro resistance. The Real News Network has this report:

(4.10pm) UK-based activist group Brazilian Women Against Fascism, who are coordinating today’s protest outside the Brazilian embassy in London, have released a statement on the election (follow them on Facebook):

‘In the most turbulent elections since re-democratization in 1985, army reserve captain Jair Bolsonaro is running for president of Brazil and is leading the polls with a campaign based on hate speech. This candidate has made many misogynistic statements, as well as offensive comments against the black, indigenous and LGBTQ people. He is also a fervent advocate of the period in which Brazil was under a military dictatorship, openly defends torture and promises to liberalise arms control. He recently vowed to “put an end to all activism in Brazil” and declared he won’t accept the election results if he loses.

Women are leading the resistance against Bolsonaro with the #EleNao (#NotHim in Portuguese) campaign. Ahead of the first round of elections, on September 29, they organised to protest and took the streets in their hundreds of thousands in over 200 cities in Brazil and 70 cities abroad, in the largest women-led protests in Brazilian history. The protest organised by Brazilian Women Against Fascism in London brought over 1,000 women to the streets, in the largest demonstration of Brazilian women in London.

His candidacy today represents a great threat not only to women but to most minorities of the Brazilian population. He has won the first round of the elections on 7th October with 46% of the votes and continues to lead in the polls for the second round on October 28th. For us immigrant women living in the UK, this has a double meaning, as the hate speech defended by Bolsonaro represents in Brazil the same xenophobia that Trump, Le Pen and Theresa May repeat in the USA, Europe and here.

This year’s campaign is the most turbulent Brazil has seen in over 30 years and this election has seen an unprecedented level of participation worldwide. The UK has the third largest Brazilian community, and over 25,000 Brazilians living across the UK registered to vote – around one third turned up on the day – and Bolsonaro received 52% of the UK vote. Our group is hoping to change this in the second round – we organized protests and we are doing grassroots work within the Brazilian community in the UK.

In this electoral dispute, we have seen the increase of violent acts and displays of intolerance in Brazil with great apprehension. In this hate wave, since Bolsonaro’s influence has grown, more than 50 hate crimes were reported – among those the case of a woman who was protesting for her rights and got a swastika cut in her skin by his supporters. In another attack, a famous capoeira (Afro-Brazilian martial art) master ‘Moa do Katendê’ was stabbed to death for taking a stance against the candidate.’

(3.55pm) Fernando Haddad has cast his vote. Here he is pictured with supporters outside the polling station. 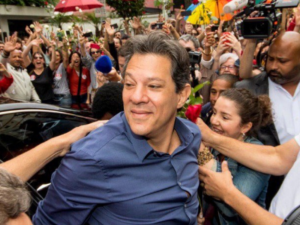 Some key points (including a couple of our own):

(2.38pm) This comment left on Vijay Prashad’s article ‘The Growing International Alliance of Right-Wing Demagogoues’ is worth a read

‘I found it really interesting how much conservative family values are a motivator in the election. This is a worldwide phenomenon and I think it is in part a reflection of the Left’s inability, indeed positive hostility, to communicating questions of identity in a universalist way. One of the real flaws of liberal identity politics is that it ghettoises the black experience, it domesticates gender and sexuality in such a way that is really alienating to a lot of people. The real radical promise of a lot of feminist and anti- racist discourse is that it innovates new ways of expressing the human condition _en toto_. (To cite just two examples–who can read Judith Butler and not grasp how much *we all* perform our gender? Isn’t Du Bois’s duality complex powerful precisely because it communicates not just the black experience but anyone who is forced to deploy their labour under someone else’s command–?we all gotta serve somebody?) . The trouble is these discourses are severely policed by those, often would be radicals, who are intent on maintaining walls of division.

I’ve no idea how much this plays into Brazil’s political imagination but certainly in US and Britain there are a lot of poor angry people whose only political outlet is the Right. It’s what I find so bitterly disappointing about much of the way Left politics has been colonised by Liberalism.’

(2.26pm) The most recent polls suggest Bolsonaro’s lead has narrowed

Bolsonaro’s lead has shortened to 56 per cent, according to the final Ibope poll. A Datafolha poll put the fascist candidate’s lead at 55 per cent. However, Haddad has not managed to gain the support of certain other candidates who dropped out of the running after the first round vote, particularly third-placed Ciro Gomes. Analysts said that Haddad’s best chance was of forming a broad-based coalition to reject Bolsonaro’s extremist platform.

This is taking place in London, UK today > Ocupar e Resistir – Occupy and Resist (10am – 5pm)

Millions of Brazilians will go to the polls today to decide the country’s next president in what is the country’s, and arguably Latin America’s, most important presidential election in decades. Leading polls with around 56 per cent of voter intention is far-right candidate Jair Bolsonaro, a former army paratrooper and current congress member notorious for his support for the 1964-85 military dictatorship and a long history of racism, misogyny and homophobia.

His opponent, Fernando Haddad of the Workers’ Party (PT), is, according to the polls, some way behind but has seen a steady rise since his belated candidature was announced in September. Haddad, however, will need to pull off one of the most unexpected election shocks of modern times if Brazil is to avoid the terrifying prospect of a neofascist Bolsonaro presidency. Bolsonaro on several occasions has spoken openly of his hatred of LGBT and black people, his plans to ‘cleanse’ Brazil of the left and of permitting security forces a ‘license to kill’ approach towards criminals.

Follow this blog for regular updates throughout the day. You can also follow our friends at Brasil Wire who will be closely scrutinising all the day’s events.

To begin, here is a selection of articles providing some context to how the world’s fifth most populous country arrived at the brink of fascism:

Brazil Heads to the Polls under the Pall of Fascism (Vijay Prashad, 5 October 2018)

Austericide, the Fire at Rio’s National Museum and the Destruction of Memory (Juraima Almeida, 6 September 2018)

About the Author: Alborada Staff