Mexico’s new president writes on his visions for the country and on what has gone wrong in the past.

When the Cuban folk singer Silvio Rodríguez said ‘a good revolutionary is only moved by love’, he was paraphrasing Che Guevara, who noted that the true revolutionary is guided by great feelings of love.

Andrés Manuel López Obrador, Mexico’s president elect, quotes Rodríguez to draw attention to a characteristic attribute of the Mexican people that allows him to summarise in a phrase his entire political philosophy: the need for a ‘revolution of conscience’.

Using as an example the touching love letters written from a jail in Los Angeles by the anarchist revolutionary Ricardo Flores Magón as he calls for the establishment of a new, ‘fraternal republic’ in Mexico, López Obrador writes:

‘This profound sensitivity is an inherent part of our pueblo … This is what I mean when I speak of elevating and propagating these feelings. We already have them: we need merely to cultivate them.’

Anyone who knows the Mexican people will identify immediately with this sentiment: behind the stereotypical, racist tropes propagated by the Anglo-Saxon world of a violent, paternalistic and unruly society, and beneath the harsh concrete of the country’s vast, soulless cities, can dwell a nostalgic, pastoral longing and a stubbornly collective vision of progress 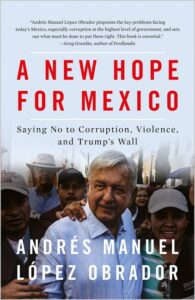 Reading López Obrador’s philosophy and policy platform, one is reminded that here is a land with vast human potential – whose endless struggles for justice can even provide leadership in a world adrift – that has been corrupted almost by modernity itself.

That, of course, is a profoundly romantic response to A New Hope for Mexico, but the political genius of its author – whose inauguration on 1 December will truly offer a new hope for Mexico – has been to acknowledge the psychological yearning for change and restoration that has surfaced in recent years.

The yearning for a new kind of politics and for a comprehensive, indeed cultural, solution to the elite corruption that has hollowed out the country and brought it to catharsis is just as, if not more important, as the centre-left policy platform that López Obrador advances.

He is now routinely categorised as a ‘populist’ in the compliant Anglo-Saxon press, although this is baffling, as here what we really have is a fairly old-style priísta in the corporatist sense – no offence intended – with a unique quality: honesty. His promises to stick up for Mexico are, unlike his predecessors, likely to be true.

What does chime with contemporary populism as it is now being experienced elsewhere, however, is the identity politics that López Obrador has skilfully channelled. He has tapped into something profound welling up like oil in every part of Mexico: the desire for a new start.

A New Hope for Mexico offers an indignant and often angry explanation of where that desire comes from and how it is now motivating the country’s new president.

With adept reductionism, López Obrador skips huge periods of revolutionary history to hark back repeatedly to the corrupt, authoritarian Porfiriato in the 19th century as an example of Neoliberalism 1.0, in order to equate that era of repression, corruption, greed and inequality – leading ultimately to revolution – with the Neoliberalism 2.0 that began in the 1980s embodied in the sexenio of Carlos Salinas de Gortari.

López Obrador’s arch villain is represented as the reincarnation of Mexico’s most ignoble anti-hero, Porfirio Díaz, from both of whom all the country’s ills emanate.

He writes: ‘The corrupt spoils of the neoliberal era are brazenly on display. Salinas’s beneficiaries, who previously were not on the map, now appear on lists of the world’s richest men. Salinas must have done alright for himself as well, though it’s hard to be precise about this. Even though neoliberals detest the comparison, Salinas is like the old dictator, Porfirio, who kept his assets shrouded in great secrecy.’

López Obrador pulls no punches as he trashes the legacy of his predecessors whom he accuses of sacking Mexico in the shameless plunder of public resources on behalf of an avaricious tribe of neoliberal looters.

The bespectacled Ernesto Zedillo, president from 1994–2000, comes under bombardment as a loyal ideologue who continued to dismantle the state and engineered a massive bailout of businessmen and bankers using public funds ‘without a second thought as to the economic hardship faced by the vast majority of the Mexican people.’

Vicente Fox, the Partido Acción Nacional (PAN) president from 2000–06 who finally broke the monopoly of the Partido Revolucionario Institucional (PRI), is lambasted as an ‘embarrassment to our country’, ‘hollow and unprincipled’, a ‘hireling for the rich’.

Felipe Calderón, Fox’s PAN successor, is shredded for his hypocrisy – a theme López Obrador develops in his scathing assessment of the Mexican right – and for his ‘criminally absurd’ war on crime that has since cost more than 210,000 lives.

‘Calderón has simply embraced his own hypocrisy,’ writes López Obrador. ‘He is the quintessential embodiment of right-wing hypocrisy; of those who wax eloquent about purity but are motivated solely by vulgar ambition; who go to church or temple but forget the Commandments; who confess their sins as a matter of routine each Sunday just to get a blank slate to sin again throughout the week.’

Calderón occupies a deep and dark place in the new president’s pantheon of wrongdoing both for stealing the 2006 election – to this day López Obrador insists that the panista did not win – and for his excesses, including the purchase of a presidential plane larger than that of the US president.

Inevitably, the outgoing president Enrique Peña Nieto does not escape these allegations of corruption, excess and greed, although one is left with the suspicion that López Obrador lets him off more lightly – perhaps for very necessary reasons of realpolitik as he prepares to take possession of the keys to Los Pinos.

Peña Nieto is recruited, rather, as a device against which to contrast the next incumbent’s policy platform – and in particular a fiscal policy premised on the massive savings that López Obrador believes can be made from cutting back the excess, corruption and sinecures that have been a feature of Mexican governance for a generation.

‘The problem is corruption, not a lack of funds,’ the president elect insists. ‘If we can rid ourselves of corruption and eliminate needless government spending, we’ll save enough capital to finance development. This is the central tenet of our programme regarding public administration. It’s possible to invest in people without falling into debt.’

A key element of that policy will be reviving Mexican agriculture and a regional development policy towards the south-east of the country, the heartland of López Obrador’s Morena party – named in an oblique reference to the darker-skinned, indigenous Mexico that has been so badly neglected by the technocrats.

And weaving throughout the book from cover to cover in his speeches on the stump while campaigning in the US among the Mexican diaspora is a bruising, vexed critique of the racism of Donald Trump, his proposal to build a border wall, and US double standards towards migrants.

‘Dishonest Mexican officials have lied to us, presenting the economic flight of millions as natural. Rather than creating jobs or providing people with dignified, education, health, or housing, they have allowed this migration to continue unchecked; the result has been a true humanitarian catastrophe … On [the US] side of the border, one finds the hypocrisy of an economic system hungry for cheap labour that legislates their persecution, that seeks to fortify the border and greatly increase deportations … We reject the erection of this monument to hypocrisy and cruelty.’

A New Hope for Mexico: Saying No to Corruption, Violence and Trump’s Wall

About the Author: Gavin O'Toole

Gavin O'Toole is the editor of the Latin American Review of Books.